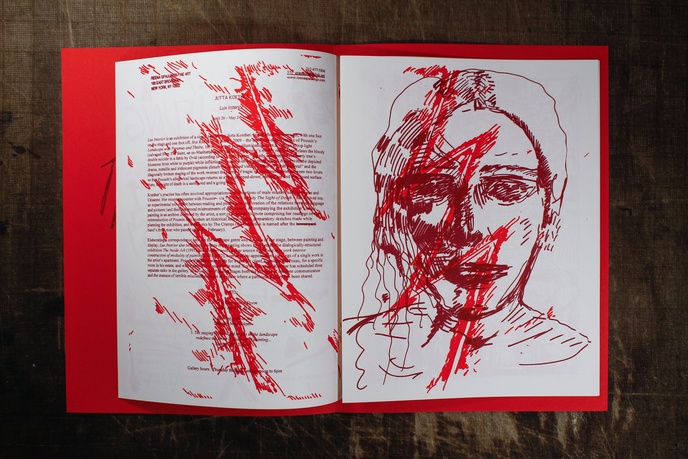 There It Is is a Fundraising Edition by Jutta Koether for the 2009 NY Art Book Fair. The work combines a series of images and texts generated by Koether’s recent performances. Presented as a series of folded loose leaves, There It Is is printed with a mimeograph in red and crimson inks.

Jutta Koether (b. 1958 in Cologne) is an artist and critic. Koether studied art and philosophy at the University of Cologne and the Whitney Museum Independent Study Program in New York. She has written for Spex, Artforum, Texte zur Kunst, and Flash Art. She has written several books and often collaborates with other artists. She is known for her loosely abstract, gestural paintings which hold deep historical resonance while appropriating from and commenting on contemporary culture. Often including text and meant to be site specific, Koether’s work mark a departure from the paternalistic tradition of painting. Her paintings have been shown at the Museum Brandhorst in Munich, Mudam Luxembourg, Moderna Museet in Stockholm, Van Abbemuseum in Eindhoven, and Kunsthalle Bern in Switzerland, among many others. Her work is held in the collections of the Whitney Museum of American Art, the Museum of Modern Art, Kunsthalle Bern, Museum für Moderne Kunst in Frankfurt; Musée d’Art moderne de la Ville in Paris and Stedelijk Museum in Amsterdam. Koether has been a Professor at the University of Fine Arts Hamburg, Columbia University, The Cooper Union, Bard College, and Yale University.