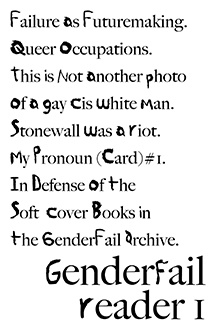 GF Reader 1 is a compilation of six essays by GenderFail founder Be Oakley compiled together for the first time. This publication features previous released essays from GF titles including Stonewall was a Riot, This is not another photo of a cis gay white man, My Pronoun (Card) #1 and In Defense of the Softcover Books in the GenderFail Archive. The GF Reader also includes Failure as Futuremaking, a new manifesto written in collaboration with artist Noah LeBien.

Be Oakley, (formally known as Brett Suemnicht) Born 1991 in Clearwater, Florida; is a writer, facilitator and publisher based in Brooklyn, NY. Oakley’s projects looks to what Fred Moten calls “the politics of the mess” by framing their identity as a white non-binary queer person in its intersections with failure and internationality. In 2015 they started GenderFail, a publishing and programming initiative that seeks to encourage projects that foster an intersectional queer subjectivity. Their work has been shown in programs and exhibitions at MoMA PS1 (NYC), the Studio Museum of Harlem, The International Center of Photography (NYC), Vox Populi and Sediment Arts. Their publications can be found in the library collections of The Museum of Modern Art, The Whitney Museum, The Met Museum, The Center for Book Arts and many others.

Book-making is strongly tied to the notion of copy. The words copy and hard copy are used to identify the multiplication that comes with publishing and the physical “presence” of a published unit. It makes then sense that already two Printed Matter tables address the practice of copying in artists’ books — the HELP/LESS table by Chris Habib (which explores the fluidity of authorship in artists’ book and multiples) and the Appropriation table by Michalis Pichler. I could as well have copied them and pasted everything into a new one entitled COPY. But something important would have been missing. Following the approach of Copy This Book, a book that we launch this weekend, I would like to address the politics of copying, which I thought might then deserve its own table.

“Depending on whom copied what, a copy can now also be understood as an exercise of privilege. Yet the notion of cultural appropriation is not readily captured in the existing legal framework. Creative and artistic communities now face the challenge to advance a mutually shared concept of copying, but also to find ways for their norms to have an impact on the legal status quo.” (Copy That? Panel Discussion, September 7, 2019)

The politics that make up the act of appropriation aren’t always readily addressed in the field of artists’ books. The wide range of artists who appropriate famous artists’ books seems infinite. In doing so, they inscribe their work within a lineage of already canonized artists/authors, contributing to replicate this same canon, keeping historical biases intact that favour men over women and the global North over the global South. I didn’t feel the urge to give them more space here, nor to reaffirm that they are questioning the figure of the author, as I don’t think they actually do. Instead, I’d like to highlight and amplify here practices of copying that are engaged in what I could call “cultural propagation”.

In the line of the democratic ideals of the early days of artists’ books, advocated by Lucy Lippard and Adrian Piper amongst others, dreaming to find artists’ books sold in supermarkets, drugstores and airports, the non-profit collective Primary Information digitizes and reprints out-of-print publications and editions. This acts against the rarification and potential speculation that goes with limited editions, and performs copying as a way to disseminate and share materials. Copying can be a subversive practice, and a vital one. The appearance of photocopy for instance really was a way for some people to gain visibility in a world in which they were invisible and oppressed. It was even sometimes life-saving: xerox machines contributed to produce the many printed matter produced by activists/artists to fight against the AIDS crisis. Queer and decolonial approaches bring in new practices of copying, such as narrated in the fabulous essay by Marc Leger, “The Drag Queen in the Age of Mechanical Reproduction”, re-published in the compilation Queer Zines. Leger describes how drag queens could not employ an art world strategy of keeping images rare, since doing so would have kept them invisible.

“To create political art, drag queens resoundingly have destroyed their aura by photocopying their image and their discursive texts both formerly presented only at privileged performances. Now anyone in the tri-state area can pin up star columnist Hapi Phace (and call her home phone number)—and not because of MGM or CBS, but a Not-a-Sloppy Copy Shop.”

Genderfail’s publications, using appropriation as a strategy to “pervert” the canon, contaminate it, but also to give visibility to under-represented and othered forms of being. They remind us that each time the work we create is published it reproduces not only itself but the beliefs and conditions of the people who produce it. Inevitably, this act of reproduction also reproduces the power relations that yield these conditions. Copy that?