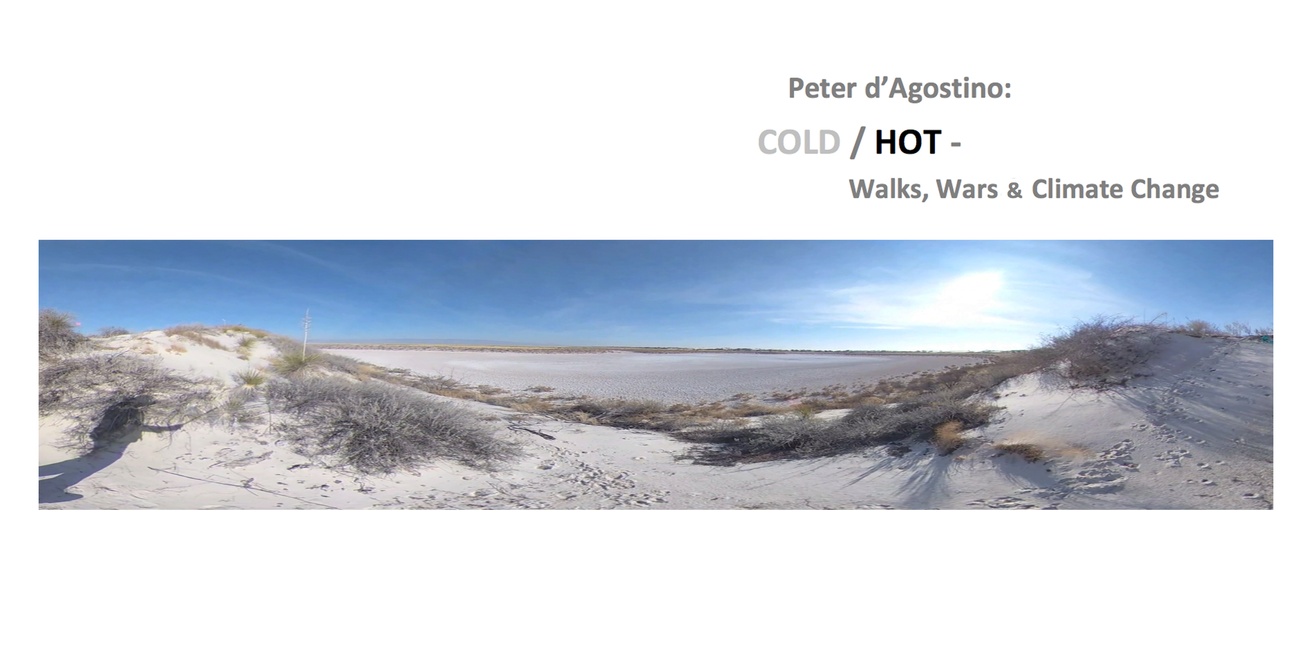 This catalogue, with contributions by Christiane Paul, Kristine Stiles, and David I. Tafler,focuses on the theme of COLD / HOT as it relates to walks, wars and climate change. The exhibition draws from a selection of Peter d'Agostino’s work, in particular his World-Wide-Walks / between earth & water installations, ICE / DESERTS / WETLANDS.

D'Agostino has performed the Walks on six continents over the past five decades. Initiated as video ‘documentation/performances’ in 1973, the Walks evolved into video/web projects in the 1990s and mobile/locative media installations in the 2000s, probing and examining climate change during the last decade. World-Wide-Walks explore natural, cultural, virtual identities: mixed realities of walking through physical environments and virtually surfing the web.

As a key to the thematic content of this exhibition, recent Walks performed with 360- degree VR video cameras serve to bridge d'Agostino’s use of new media technologies with an earlier work, VR/RV: a Recreational Vehicle in Virtual Reality (1993-94). Portraying simulations of armed conflicts in Asia and the Middle East as a fully immersive interactive virtual reality project with an HMD (head-mounted display) and data gloves, VR/RV appears in this exhibition as a video installation.

In the Anthropocene era, walks, wars, and climate change, as observed on glaciers, wetlands and deserts, become sites of accelerated and enflamed transition, potential zones of stress and conflict. In 2007, the Intergovernmental Panel on Climate Change (IPCC), a team of scientists from around the world, confirmed initial indications that human activity caused the Earth’s rising temperature.

In Climate Change and Armed Conflict, James R. Lee identifies the resultant symptoms of climate change stress and conflict: loss of arable land, migration, border disputes, resource shortages and shifting energy supplies. Exacerbating the situation, the growing population and proliferation of human civilization across the globe has diminished drastically the reservoir of untapped lands (historically a “pressure valve”). Of those untapped lands remaining, marginal areas like the Arctic and Antarctica might become more habitable leading to even greater conflict for land and resources. (Lee, 2009, p.6).