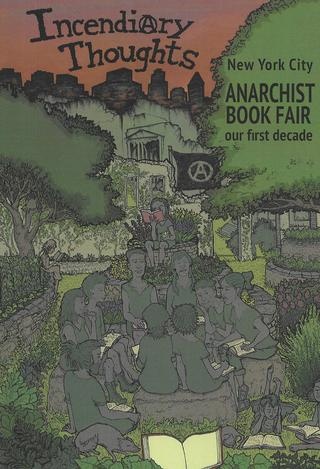 Since it began a decade ago, the New York City Anarchist Book Fair has become a vital resource for North American anarchists: a place to gather and organize; to share ideas, art, and insurgency; and to introduce our movement to the anarcho-curious. “Incendiary Thoughts” was produced by the Book Fair Collective to provide a history of our 10 years of organizing, along with a selection of essays on the movement’s contemporary struggles and accomplishments.

Written by members of the Collective as well as speakers and panelists from past book fairs, “Incendiary Thoughts” chronicles the evolution of the NYC Anarchist Book Fair itself as well as the AnarkoArtLab and Film Festival that grew up alongside it. Bringing the reader up to date on the struggle today, “Incendiary Thoughts” also includes reports on the strategies anarchist and radical publishers are adopting to survive, on anarcha-feminism, on the anarchist response to racism and police repression, on neoliberalism, on America’s imperialist wars in the Middle East, and on the intersection between anarchism, creativity, art, and comradeship. Incendiary Thoughts is our history, writing itself every day: a guide to a decade of anarchist organizing and the ways in which we are reinterpreting, reimagining, and remaking our world. - NYC Anarchist Book Fair Collective