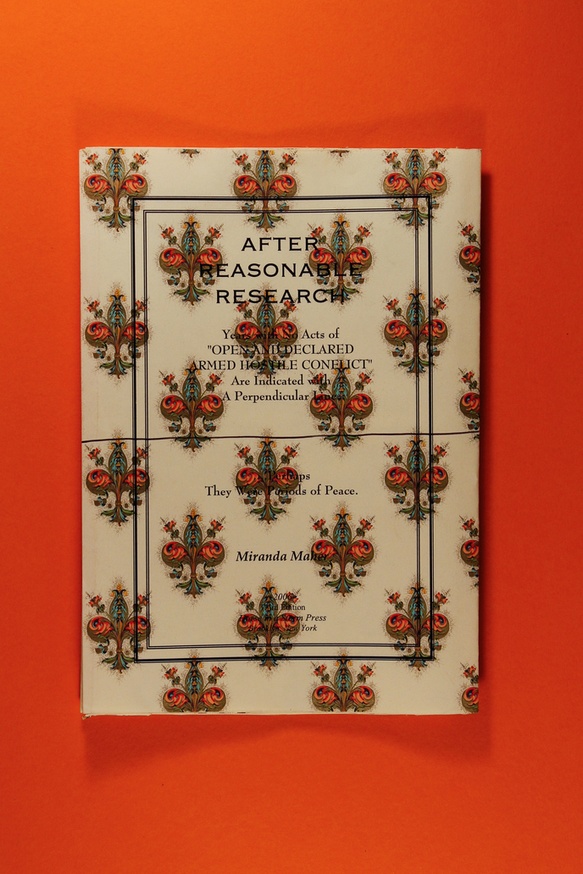 Please log in.
Out of stock
Add to table Facebook Tweet
This astounding document of the absence of peace in our time lists all open and declared armed hostile conflicts that have taken place between the year 1 and the year 2007. Printed in a tiny font and arrayed in two seemingly endless columns, these conflicts fill a mind-boggling twenty-two pages. The book is printed on accordion folded decorative paper, an uncomfortable reminder that the refinements of civilization are inseparably bound up with brutality.

This third edition comes in a plastic slipcase and includes a printed statement by the artist.

…Perhaps They Were Periods of Peace: An Exhibition of Artists’ Books by Miranda Maher, is on view until April 16th.

New York-based visual artist Miranda Maher has self-published a dozen artists’ books over the past 25 years under her imprint Horse in a Storm Press. Maher’s work is largely interested in how–taken collectively–instances of conflict or aggression can be distilled down and newly understood. It asks of us: How are these moments processed? What is the power of standing witness to the violence done between people (and who, after all, gets seen)? In re-documenting the sites and circumstance of recorded violence –whether that be in rape statistics from the FBI database, or source material tracking across 2000 years of warfare – there is something to be gleaned in the sheer volume of the tally her works keep. The artworks, as Maher acknowledges, may not prevent or deter violence, but the simple act of registering these moments, of taking stock, and being witness to it front-on is difficult work as well.