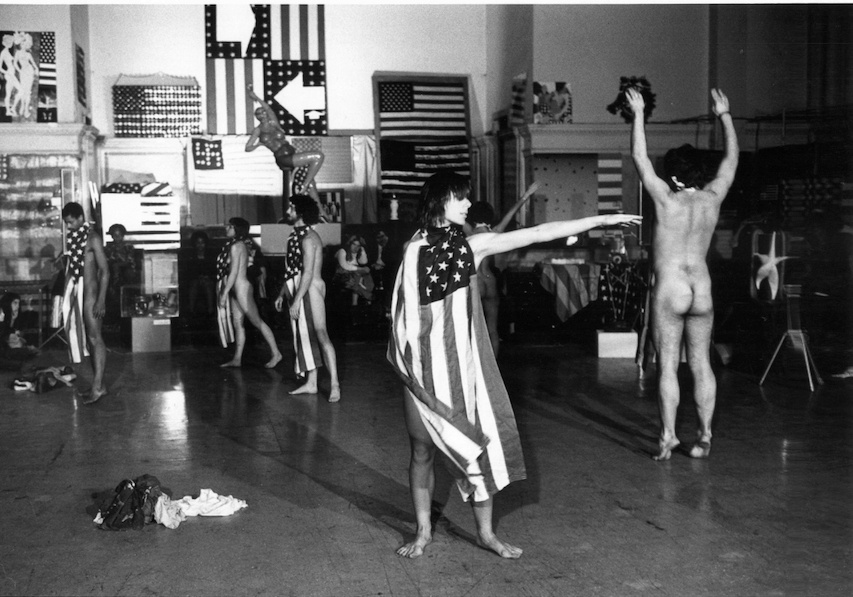 This limited edition photograph by Peter Moore was taken at Judson Memorial Church, on the occasion of the original performance of Trio A With Flags which coincided with the exhibition Flag Show in 1970. The photograph pictures Yvonne Rainer, front and center, assertively raising her left arm at a ninety degree angle, her flag costume blowing in the wind, shyly mimicking Rainer’s arm motion. In the background the Flag Show is underway, flags are dissected, parsed apart, and reconfigured. The American Flag becomes a theatrical pattern, a form of costuming. The political charge of the aesthetics of the flag were under scrutiny by Rainer and the other artists in the show who were making work during the Vietnam War, Women’s Liberation, and the Civil Rights Movement. This digital print on acid-free paper was produced on the occasion of Printed Matter’s 2019 Spring Dinner Party at Judson Memorial Church, where Rainer restaged Trio A With Flags for the first time in its original location. A historic event for Printed Matter and Yvonne Rainer, this photograph is testament to the interdisciplinary community of artists which set the stage for both Yvonne Rainer’s career and the founding of Printed Matter.

Photographer Peter Moore (b. 1932 in London) studied engineering, psychology, and art at Haverford College and Massachusett Institute of Technology in the 1950s before working in the darkroom of Life Magazine. Moore also worked for the United Nations as a documentary photographer of industry and art. Over a thirty year span, Moore shot several hundred thousand photographs of performance art. He produced much of the seminal documentation of Fluxus, Happenings, and the Judson Dance Theater, capturing the work of artists such as Trisha Brown, Carol Goodden, Charlotte Moorman, John Cage, Yvonne Rainer, Robert Morris, Yoko Ono, Robert Rauschenberg, and Yayoi Kusama