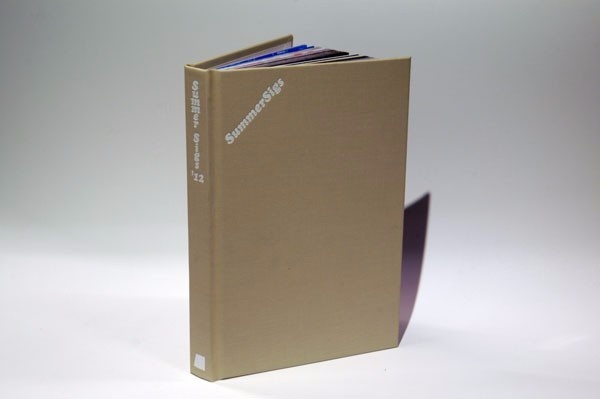 Summer Sigs is a series of commissioned artist “signatures” published using non-commercial distribution methods and initiated in part to address a seasonal lull in activity at our press. Although we can’t be sure why summer has traditionally been a slow time for our art publishing practice, we can guess that it is caused by the polarity of climate in the Pacific Northwest and the yearly cycle of productivity and leisure that people tend to adopt as a result.

Starting in early June of 2012, we offered artists a container with a modest form—16 pages, 8.5 by 5.5 inches, saddle stitched, black plus a spot ink of choice—and asked them to fill it with the expression of an idea. We hoped that by limiting the size of the books and the decisions involved in their production, the artists would find the time to create a complete work with clarity and rigor. We encouraged projects that embraced and took advantage of these limitations.

The series consists of 17 booklets. Each was completed by the artists with technical and editorial assistance provided by us, printed and bound in-house and published in an edition of 300. One third of the edition was distributed for free at a series of public releases. A second third was given to the artist to distribute as they see fit. The final third of the edition was saved until the entire series was complete, at which point each booklet became a single signature in this bound anthology. - Container Corps