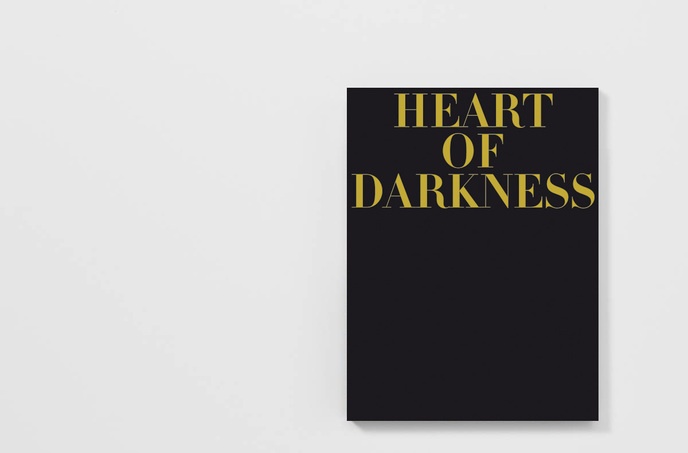 Please log in.
$35.00 ($31.50 for members)
Add to cart
Add to table Facebook Tweet
The twelfth volume in the Four Corners Familiars series - where artists create a new edition of a classic novel - is Joseph Conrad's Heart Of Darkness. The book is a new work by Fiona Banner, with photographs by Paolo Pellegrin:
In 2012, Fiona Banner was invited to create an exhibition of works drawn from the Archive of Modern Conflict, a London-based collection of photographs and ephemera relating to war and conflict. After much time delving into the archive, Banner observed a lack of images relating to conflict in the here and now. In a reversal of roles, Banner commissioned Paolo Pellegrin, a Magnum conflict photographer who has worked extensively in the Congo, to observe the City of London – its streets and trading floors, its costume and surrounding strip-clubs – through Conrad’s Heart of Darkness. The resulting photographs were first exhibited at Peer, London under the title Mistah Kurtz – He Not Dead.
A selection of these images now form part of the Archive, they can be found filed under ‘Heart of Darkness, 2014’. They also form the illustrations for this new publication of Conrad’s novella, which takes the form of a luxury magazine.
Heart of Darkness (first published in 1899) is a story of trade and corruption, and of our own conflicts and desires. From a boat moored on the banks of the Thames, Marlow narrates his story in which he travels to the heart of the Congo in search of renegade ivory trader Kurtz, who has mesmerized and enslaved his workers.
Like many artists of her generation Banner has lived just outside the boundaries of London’s financial district since the early 90s observed the area’s close proximity to the Square Mile and its apparent separation from it. This publication links with Banner’s first artist book The Nam(1997) that references Apocalypse Now, a film that uses Conrad’s text as its narrative template. - Four Corners Books