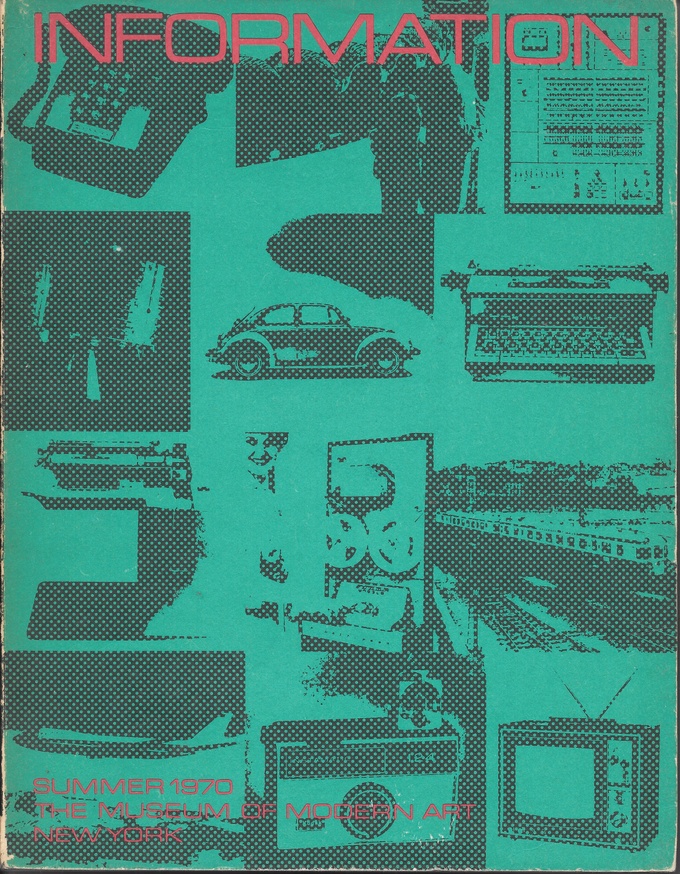 Accompanying the 1970 MoMA exhibit of the same name, this publication collects the work of over 50 artists working in the 1960s and 70s, including numerous by-now legends such as Hélio Oiticica, Lucy R. Lippard, Yoko Ono, Richard Long, John Baldessari, Vito Acconci, Joseph Beuys, and many more. Although it professes its scope to be limited, this black-and-white anthology is still quite comprehensive and acts as an discerning tasting menu for the appreciation of the postwar western artistic avant-garde, covering contemporaneous movements from word art, photography, and video to conceptual art, performance art, minimalism, Fluxus, and more — and of course with plenty of overlap and blurred boundaries in between. While the artists in this print exhibit are largely European or American, it does also feature artistic talent from Argentina, Brazil, Canada, Yugoslavia, and Japan.

The volume is organized into three main sections: the first 133 pages grant each artist one to a few pages of representation; a 4-page essay by Kynaston L. McShine (then associate curator of painting and sculpture at MoMA) grounds the preceding presentation with sociopolitical context and contemplation on communication and exchange, film and videotape, museum collecting, and other topics; and 50 pages of film and video screenshots form the book’s artistic conclusion, drawing from films by Richard Serra, Andy Warhol, Yoko Ono, Edward Ruscha, Lucas Samara, and many more. A friendly and extensive list of recommended reading follows, with writing by some of the exhibited artists, as well as by historians like Johan Huizinga, anthropologists like Claude Lévi Strauss, essayists like Susan Sontag, and media theorists like Marshall McLuhan.

As hoped for in its Acknowledgements, this publication is indeed very informative and insightful, and offers an intelligent, inspiring, and compelling view into how the pioneers of western art were thinking about and realizing their works in the 1960s.

A selection of out of print and rare titles from our display at the store.