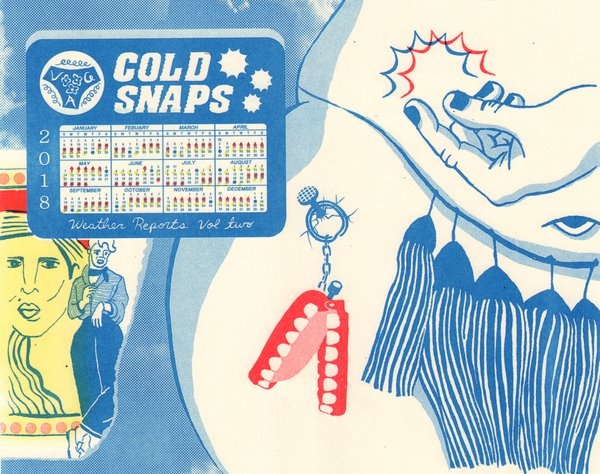 Cold Snaps is the second installment of Weather Reports, a seasonal series of “homespun enchantments.”

Vanessa Graham’s comics function as puzzle-like intersections of image and text that carve out rituals through personal iconographies. Her bold sense of design and composition allow each spread to stand alone, weaving graphic elements together and apart across its curious vertical layout, which references the turnings of a calendar, measurements of the interminable and ritualistic passage of time.

The book opens with a warning—“It’s a very very very narrow world”—accompanying its visual table of contents, or “Spell Index.” The titles listed seem to resonate with the spreads but don’t quite correspond with them; their subtle disjunctions give the sense of putting something together, making thematic connections that may not be entirely there. The graphic motif of the contents is answered in the figure of a woman painting her face with the phrase, “You’re going down.” Indeed, the book is an inexorable plummeting downward, the motion mirrored in the composition and the action enacted in the page turnings. But the bleakness of the theme here is a far cry from the tone of the visuals, whose soft color and intimate linework are inviting and at times even comforting.