Light of Other Days 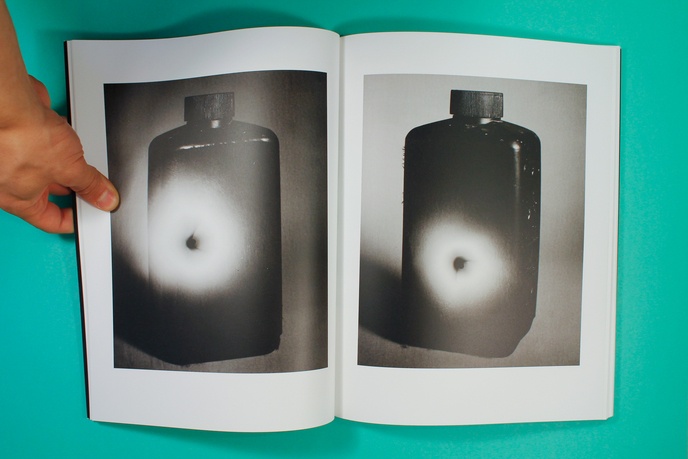 Nico Krebs and Taiyo Onorato’s artists’ book Light of Other Days consists of a selection of 44 of a total of 90 luscious black and white photographs of curious acts and objects. Most of the events and temporary sculptures are represented by more than one photograph, imbuing the subjects with faceted characters. The series, Light of Other Days, was made in their Berlin studio in 2009 and bears the hallmarks of a creative collaboration that began in 2003. The beautiful duotone printed book makes masterful reference to classic photo book magic. The photographs are accompanied by the short story “Eighteenth Voyage” from Stanislaw Lem’s Memoirs of a Space Traveller of 1982.

Krebs and Onorato typically decide upon a project’s final form―the web, a book or gallery installation―at its conception. Light of Other Days has, so far, been an exhibition experience in European contemporary art galleries and kunsthalles, where the consciously “retromodern” style of the project becomes highly pronounced. The classically photographic 20 × 24 cm gelatin-silver prints are displayed in clusters on the wall in seemingly conventional late twentieth-century black frames. On closer inspection, each frame carries identical dents and wood grain patterns, rendered in acrylic using a single mould shaped from a vintage photo frame.

Light of Other Days carries a clear photographic style, rooted in the rich aesthetic of the black and white positive paper. The 20 × 24 cm sheets are placed directly in the back of a large camera and each unique image has an exposure time of at least one minute. While the artists recognize the sensuous presence of this recently re-issued printing paper (released to them during the manufacturer’s research and development stage) the value of using a revivalist analogue process at a loaded moment in photographic culture is not the dominant statement here. The photographic paper is better thought of as an idiosyncratic scribe of events that Onorato and Krebs set up in their studio. The handcrafted or found objects and the quasi-phenomenological experiments depicted in the long-exposures define their own narratives, just as novelists sometimes describe the alchemic process through which a character develops its own journey, independent of the active orchestration of the author.

The combination of the qualities of the positive photographic paper (which is reminiscent of the gelatin-silver papers of a hundred years ago) and the lexicon of weird and wonderfully staged happenings, evokes the early twentieth-century desire to photographically capture the forces of paranormal activity. Some of the long exposure photographs directly cite the conventions of spirit photography with dark, blurry apparitions of the departed (such as the darkly playful conjuring up of the spirit of Michael Jackson) and the emanation and movement of light without obvious earth-bound logic. Other photographs build up a sensory undercurrent of Surrealism with disembodied hands and nightmarish Freudian totems. There are also the more restrained and formally classical ghosts of photography’s canonical past: Walker Evans’s transformation of wooden African masks into the photographic talismans of ritual and spiritual presence, or the deathly perfect flower studies produced by Robert Mapplethorpe in the early 1980s.

Light of Other Days is typical of Onorato and Krebs’s masterful heightening of a photographic magic. The experience is, miraculously, neither nostalgic nor revivalist, but metaphysical. In the use of a resurrected photographic paper, it is as if Light of Other Days is, quite literally, a form of photographic life after death. The pseudo-paranormal in-camera capture of unseen events genuinely occurred as part of a working practice, for there was no way for the artists to know how each unique long exposure would ultimately take visual form. So we can sense the comforting presence of a knowing photographic process of trial and error, luck and happenstance at play. In Light of Other Days, Onorato and Krebs appear to be in the thrall of the enduringly magical capture of the photograph, driven to write their signature on the increasingly tight feedback-loop of photography.

Taiyo Onorato (born 1979 in Zurich) and Nico Krebs (born 1979 in Winterthur) studied photography at the School of Art and Design Zurich. Both live and work in Berlin. “Light of Other Days” is their first publication with Kodoji Press.

Wolfgang Scheppe
Taxonomy of The Barricade. Image Acts of Political Authority in May 1968
Books
$49.50