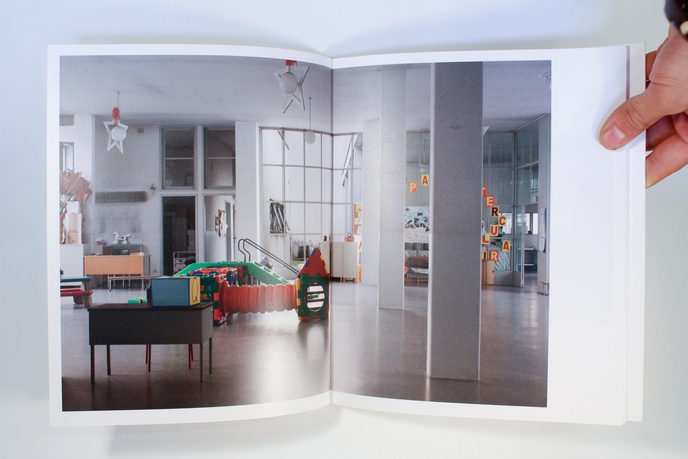 n the image and text essay ‘Future History,’ Eiko Grimberg documents Italian architecture that has outlived its context. His contemporary photographs record buildings in Italy and in the former Italian colony of Eritrea, with New Orleans’ postmodern Piazza d’Italia striking a note of contrast. This artist’s book contains a dense selection of images from a body of photography and video work created between 2010 and 2012. This work has been exhibited previously in various configurations and contexts. Its form in ‘Future History’ is the result of close collaboration with designer Till Gathmann; a precise selection of the images is presented in a modernist manner to communicate the intent and essence of Grimberg’s extensive project.

The buildings in ‘Future History’ are examples of ‘Razionalismo’, the Italian version of International Style Modernism built in the 1930s. Emerging during Mussolini’s dictatorship, Razionalismo architecture was contemporaneous and frequently indivisible in design from official fascist building, now referred to as Stile Littorio. Italian fascism and Modernism blossomed in approximately the same period, during which the fascist state engaged in a significant infrastructural and institutional building program. Countless school, hospital, road, rail, housing, government building and redevelopment projects were realized, several of which are viewed today as noteworthy examples of Razionalismo. These projects put architecture at the service of a state equally intent on improving health and housing, making its might conspicuous domestically and colonizing in Africa.

The photographs in ‘Future History’ are interleaved with extracts from a series of papers first published in 1926 and 1927 by Gruppo 7, a group of architects from the Milanese Politecnico who championed the concepts of rationalism. This group called for an architectural renewal within the victorious state of Italy, for the development of a new idiom of form ‘until it dictates a style to other nations, as it has in the great periods of the past’. The essence of rationalism was ‘truth, logic, order, and Hellenic lucidity – true character of the new spirit’.

The political and ideological backdrop against which Razionalismo was commissioned no longer exists, but the buildings remain in the service of the Italian state as post offices, stations, schools and community centres. What happens to the political connotations from the erstwhile social order? What does the monumental symbolism of another time mean today – does it become empty or does it take on another meaning? Is it merely arbitrary and was it ever thus?

Eiko Grimberg, (b.1971, Karlsruhe) studied photography at the Hochschule für Grafik und Buchkunst Leipzig. He lives and works in Berlin. ‘Future History’ is his first publication with Kodoji Press.

Wolfgang Scheppe
Taxonomy of The Barricade. Image Acts of Political Authority in May 1968
Books
$49.50