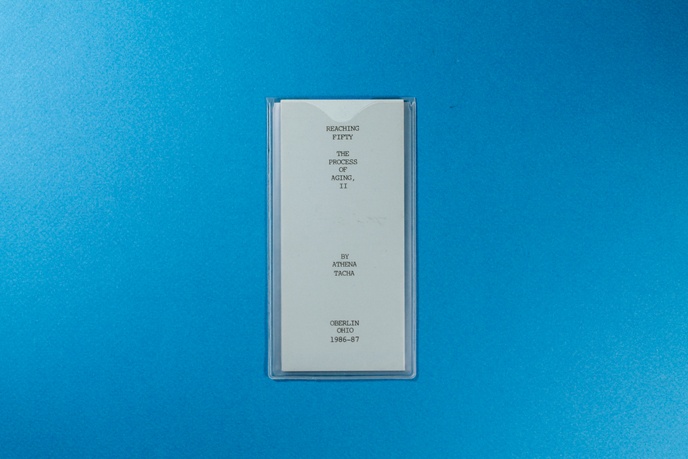 “I just became fifty years old, which is looked upon as advanced middle-age by our youth-glorifying Western society, but was considered to be the peak of life (at least for men!) by many ancient cultures that respected age and associated it with wisdom.”

The second installment of Tacha’s The Process of Aging hews closer to the societal and cultural attitudes surrounding aging, particularly the differences between men and women as they begin to show signs of aging. She inventories her accumulation of white hairs, the appearance of her hands, the sagging of her skin, the darkening of the areas under her eyes, and the lines that run from nose to mouth. Yet for these glaring changes, she feels “almost as youthful as when [she] was twenty-five.” Tacha’s wisdom comes through in the observation that perhaps the dread and worry that comes with aging is as much about seeing loved ones age as it is about one’s own self. In the time between this and her previous installment, she has seen the loss of both her mother, her father-in-law, and her best friend, while facing numerous other stressful experiences and close brushes with death. In the end, Tacha likens middle age to adolescence, a new period of change and self-discovery. Her continuing project remains unflinchingly vulnerable and immensely powerful for its truth and intimacy.

From our exhibition Athena Tacha, The Complete Bookworks 1970 to Present: “Tacha’s accordion-fold pocket books are “meditations on a particular aspect of life, describing ordinary acts and phenomena such as scratching dandruff from the scalp, considering which groceries to buy in the supermarket, or the appearance of wrinkles with age. Tacha’s reflections bring to light the broader implications of these seemingly commonplace events, making allusions to the ecological, sociological, and political impacts of our personal choices and emotions and visa versa. Just as often, Tacha’s reflections stay within the intimate scope of the act or object described and leave the reader to draw their own conclusions.”